Yeah, I may have started collecting vinyl late in the game, but I've got to tell you, there is nothing more satisfying as when I pick up one of those records that I ignored the first time around. Feeling as strong as I do about this kind of music, it is hard not romanticize the experience...it's like these are records that I'm supposed to own...they belong in my collection, and finally acquiring them all these years later is like reuniting long lost friends. 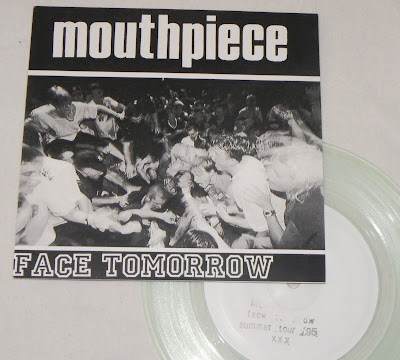 In 1995, Mouthpiece released their Face Tomorrow 7 inch on New Age Records. It was a strange time for me, as I was still heavily into bands like Shift and Christie Front Drive, plus I was digging on Endpoint's last record with the slide guitar...yet, under the surface bands were starting to make a more straight forward, traditional Hardcore sound. Bands like Fastbreak, Floorpunch, and Ten Yard Fight were starting to make some noise, and reminding me that music didn't have to be uptight and pretentious all the time...it didn't always have to be an ultra-serious experience. Right there in the middle of this revival was Mouthpiece. They had stuck it out through some of Hardcore's darkest days, and they survived to release their strongest record with Face Tomorrow. 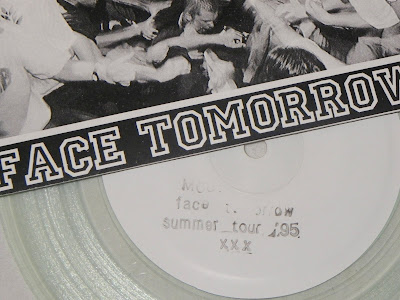 I don't believe that there are countless special pressings for the Mouthpiece records, therefore I haven't been too tempted to really make a run at collecting their vinyl. Where was the challenge? 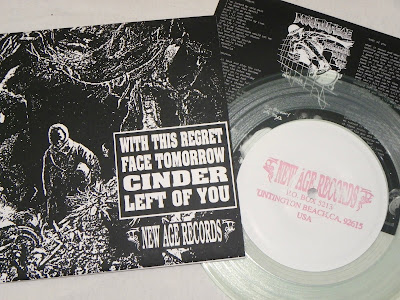 Prices seem to have come down for Mouthpiece vinyl, as popsike shows that a few years ago this record went for $85, then last year one went for $40...in 2012 one went for $28, and then I picked up mine for under $20. Seemed like a good time to pick one up.

Good score Mike. I'd like one of those bad boys myself.

Nice One Mike. I know what you mean about picking up records you feel you shouild already have in your collection

I got one of these when it came out. But also picked up a second copy in about 2005 which was listed badly on eBay. I was the only bidder and got it for like $3.50 or something stupid. When it arrived I had to keep it because it was one of the 50 copies with the 'increase the grease' stamp on the labels.

Hey Mike, Back to back has Beware 2nd presses on sea foam green /100 and just posted the new Face Reality record /150 orange! Just a heads up

Thanks for the heads up man. Already ordered! I feel lucky that I was able to get both of those!

Fuck yeah. Those will be getting $20 on ebay all day. I just checked, and the Orange Face Reality is already sold out!!!!