You Tell Me You Want To Be Different 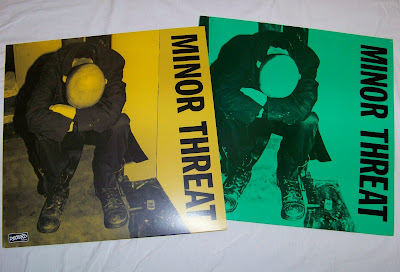 Man, I love album cover variations for different pressings. I'm not sure what it is, but slight differences, whether it be the change from red to blue with Nothing Done's name on the second pressing, or the change from a blue cover to a red cover for the euro pressing of Planet Mental. Yeah, I geek out about that stuff.
Because a serious Minor Threat collection is way past my means, I never really considered it. However, when Dischord recently remastered and repressed the 12 inch collection of Minor Threat's first two 7 inches, I was struck with the urge to own a couple of copies. It wasn't enough that the new pressing was with a new yellow cover, but throw in the fact that one of the local record stores here still had the older pressing with the green cover in stock...how am I supposed to not buy them both in one shot? What self respecting collector would walk away from that? This album could very well be the best piece of hardcore wax ever pressed, and I'm happy to finally own it on vinyl. But, hey, that just how I see it...in my eyes...so what the fuck have you done? 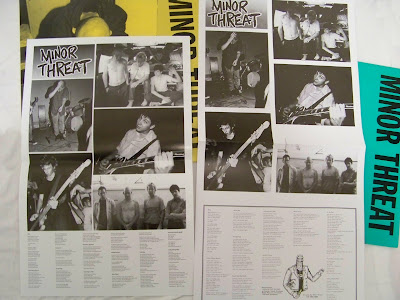 Not only was there a difference in pressings with the album cover color, but the inserts were slightly different as well. The yellow cover insert is smaller, with some other slight differences in the layout. And then there is the differences in the vinyl. I bought the green cover first and found that it came with a nice matching mint green colored vinyl. I expected the yellow cover to also have the corresponding colored vinyl, but instead found it was pressed on black.
Posted by Mike at 11:16 PM