Nailed to the Golden X 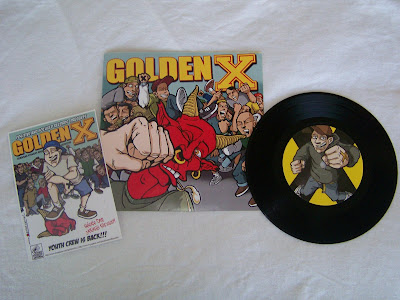 The thing that I love about last.fm, other than the fact that it tracks my listening habits, is the awesome people that I've met through the site. Last year, Rob was going to an SSS show in Europe, so I asked him to pick me up a copy of their ultra limited edition CD that they were selling on their tour, and he was kind enough to get it and send it to me. Then last month Onno sent me a message asking if I wanted the Golden X 7 inch that someone had given him. Since he is not a "vinyl freak", he offered to send it my way if I wanted it. I didn't know anything about the band, so I checked out their myspace page. Other than the really bad name...it doesn't get any cheesier than a name like Golden X...the cover for the 7 inch made me kind of nervous. With the picture of a fist knocking Satan in the mouth, I was really afraid that this was going to be some lame Christian core Straight Edge band. Man, there is nothing I hate more in my music than God. Something about just rubs me the wrong way, and I'll immediately shit on it. Same thing was true when Krishna invaded hardcore. I wanted nothing to do with it. Sure the first Shelter album was pretty good, but by the time they started in with their "defense of reality", I found it to be more of joke. In the end, I couldn't find any overtly Christian messages on this Golden X record. It's just 3 Austrian dudes, pumping out some generic Straight Edge hardcore. I can get down with that. This was released on Positive and Focused Records, and was limited to 250 for the black vinyl pressing, and only 180 of those did not come with a CD. This copy has no CD.
When Onno sent the 7 inch, he also included a CD of his old band Inrage. This some pretty good hardcore out of the Netherlands and probably would have fit in nicely with the youth crew sound that Crucial Response Records was putting out around that time. I just consider myself lucky to have made these connections, and it just goes to show how powerful a tool music can be. Thanks friends. 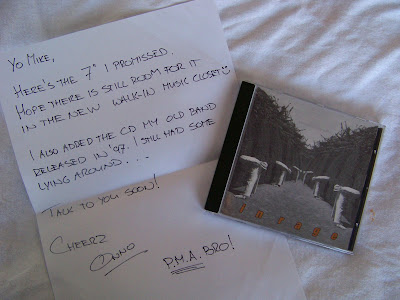 Onno said...
This comment has been removed by the author.
3:44 AM

A few minutes before we've just put a blogpost about some tapes and GX and I've checked your blog with this update. Rad!

Inrage...why do I think I have some vinyl of theirs. In my head I see a light blue cover, with black lettering. Damn I want to go home right now and start flipping through stuff to find this thing.

Still not sure what to think about Golden X , you should check Pressure out though, new Portugese band who will release a record on Positive&Focused soon.