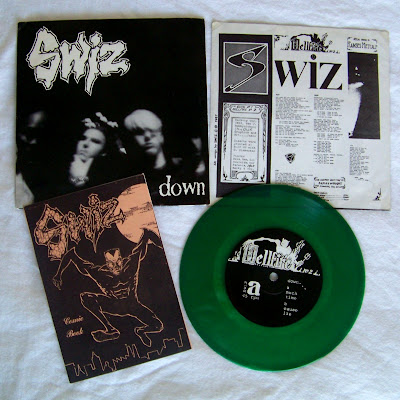 Sometimes when I'm at work, listening to music, I'll do a search on eBay for whatever it is that I'm listening to at the moment. On this particular day it was the No Punches Pulled discography from Swiz. It was then that I stumbled upon their first 7 inch, Down, on green vinyl. I've always loved Swiz, but since I owned the discography CD, I've never been interested in seriously collecting their records. Something clicked when I saw this record up for auction...I needed it. To my surprise, I won the record for only $6.50...and after seeing their first and second LP sell for between $40 and $50, I think that I got a pretty good deal on this one. After winning this, I also found a gold colored vinyl pressing that someone was selling on eBay as well...but the $70 price tag seemed a little too steep for me.
The packaging on this record is well done. The colored vinyl is slick, and the little hand drawn bits on the lyric sheet are a nice touch. The record also comes with a cool Swiz comic book, that according to Jason Farrell in the Radio Silence book, "the gist was supposed to be a kid laying a rose on the grave of hardcore, thereby resurrecting its sleeping ghost, who then shoots him two tickets to a Swiz show where they rocked all...night...long.". Now I know that the singer, Shawn Brown, was the original singer for Dag Nasty, but I never really picked up on how much these two bands sound similar until I was listening to this record. These songs sound like they could have been lifted right off of Dag Nasty's Can I Say album. Great stuff.
Posted by Mike at 9:49 AM

This made me laugh. I was talking to a friend today about Swiz records, and I said how the only Swiz 7" I don't have is the 1st 7" on green. And it sounds like this is literally the only Swiz record you have. Ha!

That is funny. Actually I do have a couple pieces of Swiz vinyl. The first Swiz album that I owned was Hell Yes I Cheated, and then the 7 inch With Dave. Everything else I only had through the discography CD.