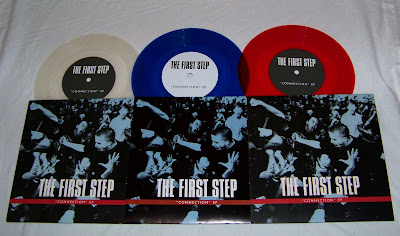 I was hoping to receive one more pressing of The First Step's newest 7 inch before posting this, but it didn't arrive, so here you go. I've had the blue vinyl from Rivalry for a while now. It is the second pressing, and limited to 1,270. Both the clear vinyl, 175 pressed, and the red vinyl, 325 pressed, were released on a South American label called Waking the Dead Records. There was a guy on eBay from Chile, that was unloading a few of these. I was able to pick them up without dropping a ton of money on them.
Posted by Mike at 7:10 AM

I haven't even got this record. I saw someone's photo with about 15 versions of this, so figured I would stay away! Glad to see you got sucked in though :o)

You need to get in on this. Best record of the year so far.