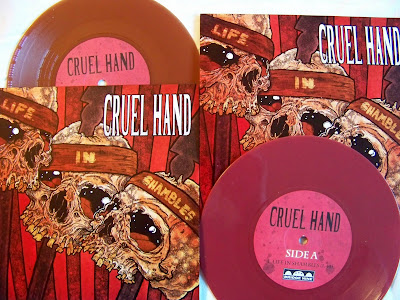 Another one of those 7 inch singles from Bridge Nine, this time offering us a preview of Cruel Hand's new album, and nothing more. Just two songs that will be on the band's album that will be up for pre-order in the next day or so. 300 on brown and 700 on maroon colored vinyl. The coolest thing about this 7 inch, though, is the sick cover art. Shit looks awesome. The artwork looks like it was from Pushead, but I'm pretty sure that it is a rip off. Anyway, these two songs are great, and I'm looking forward to the new album. When I ordered this record from Bridge Nine, I was really feeling the pinch financially, so I had to pass on buying the new Ruiner vinyl. Maybe I'll pick that up when I pre-order the new Cruel Hand.
Posted by Mike at 8:13 AM

i stopped buying from B9 years ago. I ordered some stuff and they sent me literally half of what I ordered. Several emails later and I got nowhere. I gave up collecting them. Good job too. I would hate to be sucked into buying these pointless "album sampler" 7"s that they put out these days.

I've never had a problem with their mailorder, in fact, when my order for the Champion final show pressing of Promises Kept failed to make it to their system, and the record "sold out", they were very helpful in getting me the two copies that I tried to order.

You are right about those album sampler 7 inches though. Total waste, but man this Cruel Hand one looks so sick.

I saw this record at the show last night, I had a load of True Colors merch though, i would have picked it up if i didn't blow all my money.

I like 'em, Rold. Maybe like a slower version of Outbreak....maybe. Check out their myspace page for some songs.

I do love Outbreak so I'm gonna check this out. I heard somewhere both bands have some members in common?