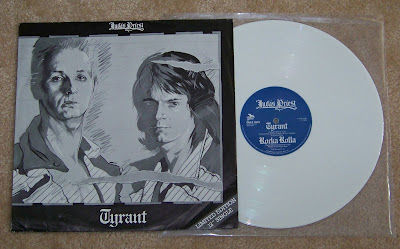 Man, I have completely fallen in love with early Judas Priest. Those first four albums, from '74's Rocka Rolla through '78's Stained Class, are just complete classics. While Sabbath may have "invented" Heavy Metal, Priest were one of the first bands to embrace the style and proudly attach the label to themselves. Between re-discovering these early records and starting to read Martin Popoff's book, Heavy Metal Painkillers, I have started to think more and more about starting to collect some of those early records. A few months ago, on a shopping trip with Jeff, I bought Sad Wings of Destiny and Sin After Sin to get the collection started, but this entry is for the more obscure Tyrant 12 inch on white vinyl. I really have no idea how rare this is, or if it is at all, and it seems like it might be a cash-in for Gull Records trying to squeeze some money out of the band's legacy by releasing this 12 inch single in 1984 for songs that were released in '74 and '75. Either way, I'm happy to add this to my collection.
Posted by Mike at 9:41 PM