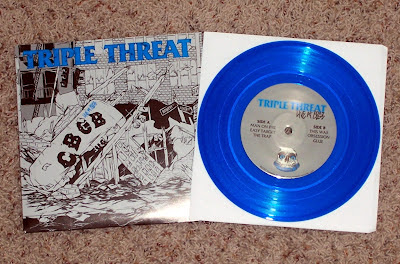 One of my biggest regrets is never making it to CBGB's for a hardcore show. The place was a New York Hardcore icon steeped in the tradition of matinee shows. Some may say it was one of the cornerstones of Hardcore's "golden era", with Youth of Today, Judge, Side by Side, Cro-Mags, Sick of it All, and Agnostic Front thrashing out live sets during their prime in that club. In all my years of going to shows, it never really crossed my mind to drive all the way to NYC and go to a show there. Then Rob, Paul and I went on our roadtrip to New York last year, after CB's had closed down, and I was wishing that we had made the trip a year or two earlier and had caught a show there...any show...just to say I had been there. I feel kind of privileged to have caught the tail end of the club scene in Boston, before shows were killed and driven to church basements and VFW halls (which are still cool in their own right). Yeah, there were Slapshot shows at The Channel, or Sick of it All at Bunratty's, or seeing Strife and the beginning of the 90's Youth Crew revival at The Rat, but man, CBGB's, that's the one that I wish that I had made it to.
So anyway, this entry is for the Triple Threat Live at CBGB's seven inch. I'm not really a fan of live records, and this one doesn't really do anything to excite me, other then the cover of Glue by SSD. However, it is on blue vinyl and limited to 200 pressed. Plus, it keeps my Triple Threat collection complete.
Posted by Mike at 8:54 PM

I'm with you on this one. I was in NY the summer before it closed and couldn't convince (coerce) my friends to stop by. Emmylou Harris was playing, but I didn't care. I just wanted the experience and possibly an over-priced tee shirt. I didn't push for them to go, I assumed it would be there next time.

I'm still kicking myself for that one.

Triple Threat's a really good band i need to listen to them more often.

I hear you about not ever going to the most legendary punk venue in the world. It would have been cool just to look around and try and feel what it would have been like when punk and hardcore music was really emerging.

We should have just gone to stand outside where it was and soak up the history. Maybe since bands do reunion shows (i.e. Insted, Gorilla Biscuits, YOT, Mouthpiece, etc.) then maybe CBGB's can hold occasional shows?? Let's vote on it!