Getting The Led Out 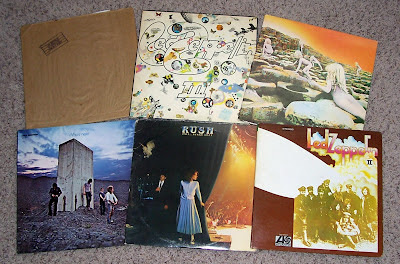 Another afternoon at Jeff's, another afternoon of free records. Once again, Jeff was looking to clean out his vinyl collection, getting rid of the doubles, and I ended up walking away with some classic Rock records. This time around the main focus was on Led Zeppelin, as I was able to grab a copy of Led Zeppelin II, Led Zeppelin III, Houses of the Holy, and In Through the Out Door. Since I've recently discovered how great Rush were in their early years, I was also able to pick up a copy of their live album, Exit...Stage Left. Those early Rush records are amazing...when 2112 kicks into the start of The Temples of Syrinx, it is so heavy and powerful that it gives me goosebumps. One of the best songs to clock in around 20 minutes. The last album that Jeff gave me was a copy of Who's Next by The Who. I'm still on the fence with this band, some of their stuff is pretty cool, and some of it is just okay. It may take me a while longer to fully get into this band, but I can still appreciate them in small doses.
Posted by Mike at 2:15 PM

do you have any pictures of your WHOLE collection of records?

I don't, but I'm hoping to be moving the collection to my new 'music room' in a few months, and plan to take pictures of it then.

That is my dream one day, if i ever own a house, have a whole room dedicated to records, get some nice speakers, maybe frame a few of my favorite records to put up on the wall.

Just sit there and jam records all day when i have the time.

Well, it is more like a 'music walk-in closet'. Big enough for full walls of shelving to hold vinyl and CD's. I'm hoping to get my stereo and a chair for kicking back, but we'll see how much room I end up with. The full music room will have to wait until the kids move out!