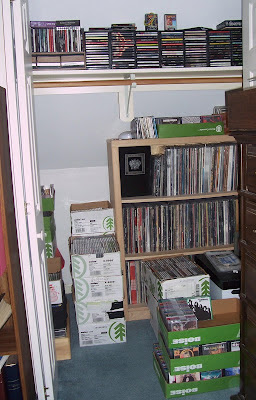 I love statistics for my music. Last.fm tracks what I'm listening to online, and the OrangeCD database helps keep my music collection cataloged with all kinds of data at my fingertips. With OrangeCD, I can sort my albums by year, compare the number of CD's I've bought to the number that I've downloaded...all kinds of geeky shit. I was thinking of putting together a "Best of 2007" list like Tyler does, but it just seemed to overwhelming to go into such detail, so I scrapped the idea. However, 2007 was such a big year for me musically, that I felt the need to put some kind of recap together, and I decided it would be more numbers based.
In looking through OrangeCD, and sorting some data, I found that I had added around 362 new records/CDs to my collection! That's almost a new album each day of the year. The problem with liking so much music, is that I really never get the time to sit and really spend a lot of time with new albums. I worked to remedy that at the end of the year, and my resolution for 2008 is to really get familiar with new music before filing it away deep into the collection. So, anyway, here is the breakdown of what was added to my collection for 2007.
35 - 7 inches
6 - 12 inch singles
90 - LPs
1 - LP box set
109 - new CDs
119 - burned CDs
2 - CD box sets
While 2006 saw the release of some of the best hardcore records with Have Heart, Verse, The First Step, Betrayed, and Outbreak, 2007 managed to drop a few gems on us as well.
Best Hardcore of 2007

2007 was also a great year for Metal, as I went from revisiting my youth and falling in love with the classics again to really digging into what the Metal world had to offer today. There has been a huge revival of Thrash, and David (Genocide_Junkie) was really a big help in keeping me in touch with the new music.

Of course I would be remiss in not mentioning the incredible album that the White Stripes released this past year. Icky Thump was one of their best, and I have yet to get tired of listening to it. And finally, there was only one Hip Hop album in all of 2007 that really interested me, and that was Brother Ali's amazing The Undisputed Truth. Hardcore and Metal really pushed Hip Hop out of the picture for me this year, but this one album was too good to ignore.

Wow man, 362 Records!. Thats awesome. Nice to see True Colors crack your top 5. Get The Most is definitely deserving of that # 1 spot.

I think i would have had Nothing Done's 'Everybody Knows' in my top 5 had i heard it before years end. That and Capital's 'Homefront' might have made my top 10.

What is this Orangecd thing your talking about?

It was tough to pick a top 5! The OrangeCD database is hotlinked in the post. Check it out.

You know there are support groups out there to help you.
"Hello, my name is Mike and I'm a musicaholic. I have not purchased or downloaded a record in over 15 minutes."

I keep searching for support groups on eBay, but all I seem to find is more and more vinyl!

The picture is awesome! I wish I had just one shelf of my bookshelf full of records.

I went out last night and was pricing the wood for my new shelving. I could either do it up nice for $800, or go cheap for $400. I can't wait to get my music room done, so I don't have to crawl around on the floor, digging through boxes to find that CD that I want to listen to.

Interesting, I didn't know there was a new Overkill album in 2007.

I wrote about the new Overkill record a few posts ago. Check it out!

I have now officialy ripped all my cd's. Jos of Seein' Red is ripping the vinyl for me and after the tapes are done I can officialy put my music collection in a closet or so ;-)

Thanks for the mention Mike! It's an honor. Keep collecting ;)

Pim, I love that record. It gets better with each listen. Looking forward to the new 7 inch!

Said and Done is still around? Thats the band that did the song called "Stagedive" right? I'll have to check them out. I remember them from the early 90's but I didn't know they stuck together.

Different Said and Done. This one is from The Netherlands. Still a cool band though.