The Purple and the Puke 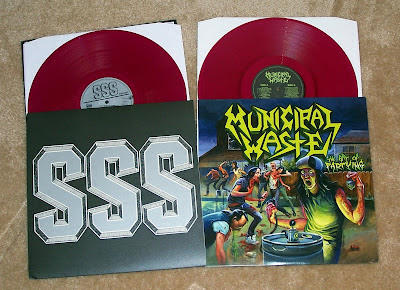 I got some more records in the mail today, so I figured that I had better get these four albums cleaned off my desk...especially since bought them about 4 months ago. I either have no time, or I'm a huge procrastinator.
Municipal Waste released their new album, The Art of Partying, on 10 different colors of vinyl...a collectors wet dream. I really like the band, but spending over $100 to get the entire collection was a bit much for me at the time, and while I really like the band, I'm not really out to collect everything they release. Since Earache sucked ass, and wasn't carrying the colored vinyl for the new Municipal Waste and SSS records, I found that Very Distro had them for sale. Very had a few colors up for sale, and I decided to go with the purple one. Like I said, Very had the new SSS vinyl available as well, and I was really impressed with their throwback style of thrash, so I grabbed one of those as well.
The new Down to Nothing is incredible, and will top my list of the best for 2007. Along for the Ride is a classic hardcore song, as well as most of the songs on this album. I already had this album on CD and blue vinyl, but Revelation released a second pressing on purple, and for me, the band is collectible. Allegiance is a band, like Go It Alone, that takes a while to warm up to. They aren't instant gratification bands, they are bands that take repeated listens to fully appreciate. I didn't jump to buy the new Allegiance album, as money was a big factor, so I didn't rush to get the limited pressing. Instead, I got the one that Rivalry Records calls "metallic gold", but it really looks like some disgusting color of puke or diarrhea.
I didn't notice when I had placed the order, but when I received the records I realized that three of them were the same color (even though they don't look it in the pictures, they are purple). Funny little coincidence. 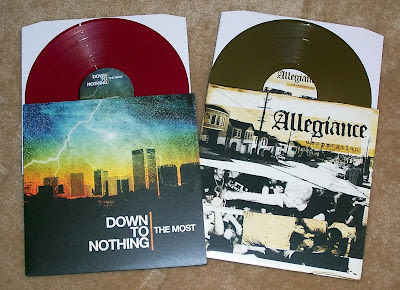 I agree, Allegiance is a band that takes a bit of warming up to, i don't like them quite as much as GIA but still good stuff.

I think I've said this before but i find stuff that takes a while to get into ends up being the most memorable. There are records that i wrote off upon first listen but eventually went back to and some of those have become my favorite.