A while back, Jeff and I spent another afternoon in his basement, flipping through old records and just generally kicking back, listening and talking nothing but music. It was really the first time that I had gone through his Heavy Metal section, and numerous times I needed to wipe the drool from my chin. So many amazing records. Raven, Savatage, early Megadeth and Manowar, Demon, Witchfinder General....damn, I could go on and on. I was literally jealous of his collection. Jeff is a few years older than me, so he grew up buying vinyl in the early 80's, totally catching Metal as it started to take off. I was a few years late to the scene. Plus, when I started buying music, CD's were starting to take off so there was a very small period where I was buying music on vinyl. I look back now, and remember seeing all those great Metal records in the stores, but instead of vinyl, I bought it on cassette or CD. If I had a time machine... 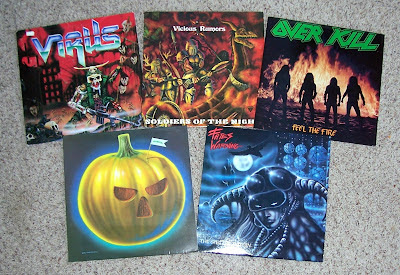 Jeff sold me some of the records that he no longer wanted, or they were ones that he had originally bought, but never got into them. He still owed me some money for the Black Sabbath tickets from the concert back in the Spring, so we made a trade to pay off that debt.

In cleaning out the duplicates in his collection, Jeff handed me a few records from The Doors for free. No need to go into each one, but I believe that Strange Days is the only vinyl from the band that I don't own. As a collector I also have the box set from them, where each CD is packaged in a replica sleeve to look like the original vinyl release, complete with gatefold sleeves and inserts. 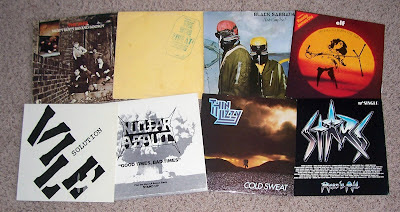 And then there was the stack of duplicates and various 12 inch singles that he bundled together and sold to me for $10.

thin lizzy is definitely in my top 10 bands of all time, maybe 3 spots below battery :)

I only have a few albums by them, but man, Fighting and Jailbreak are just amazing.

It seems like you need to thank Paul for all of your music choices, without him would you have had anything? or would you still be listening to Duran Duran?
eh, Wrinkles?

Yeah, remember when we would go record shopping together, and we would pick up a few tapes each of some Metal band that neither of us had heard before. Good times, Pule, good times.

I know that know! :) And that is the reason that I no longer own that record. Cha-ching!