My computer area is getting out of control, with stacks of vinyl building up all around me. The past few months have lent very little free time for me to just sit and enjoy new records. It has gotten to the point where my desk is cluttered with piles of records that need to be added to the database I use that catalogs all of my records and CD's. I'm going to have to get this stuff added to my blog so that I get get his mess cleaned up. So much music, so little time. 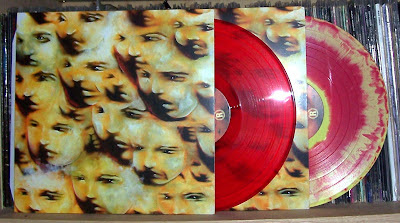 Man, Rivalry Records puts out some of the sweetest looking vinyl, and the new Soul Control and Red Handed records are no exception. Soul Control's album, Involution, was pressed on red (limited to 600) and red/yellow swirl (limited to 200). They also had limited pressings on orange/yellow swirl, plus the black vinyl record release pressing. I saw that the band had a few of those left over from their tour and were selling them through their myspace page, but I was too broke to spend more money on additional pressings. About half of the tracks on this album are from the 7 inch and the split with I Rise, but damn, this is a fine record...full of hardcore groove in the vein of Burn. Great stuff. 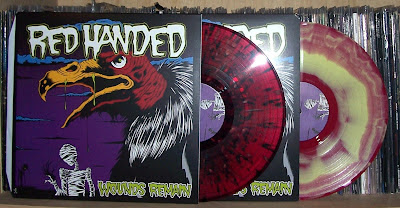 The new Red Handed record, Wounds Remain, was also pressed on some pretty tasty looking vinyl. The purple and yellow swirl was limited to 800, and looks good enough to eat. The pre-order color was limited to 200 and the color was called "Grape Citrus Explosion". Very creative. Much like the Soul Control album, Wounds Remain is about half full of previously released songs from their 7 inch. It took a little while for these songs to really grab me, but after a few listens I was suddenly hooked on their snotty, hardcore punk style. Love it.

It's all about selection Mike, you cannot and will not have it all ;-)

That's the problem with liking so much music...I want it all!

I have the soul control out of 200 or whatever. i like it so far, i need to listen more though.

As for Red Handed, still haven't heard it. I'm taking a trip to the record store this weekend. Hopefully they have it.