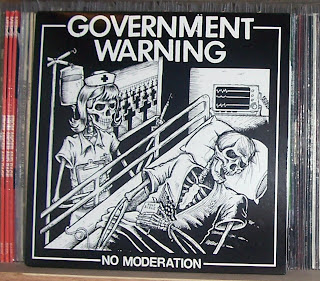 A few weeks ago, I saw that Tyler had a band called Government Warning on his weekly last.fm charts. I had never heard of the band before, but the kid typically had good taste so I checked them out. I found their myspace page and checked out a few songs. They had a great early 80's hardcore sound with some early D.R.I. thrown in for good measure. Every distro that I usually use was sold out of this album, and I was afraid that I had slept on it too long and that it was out of print. I finally found their No Moderation LP in the webstore on the No Way Records site. I had no idea how reliable this label was...for all I knew the label had already folded up and no one was minding the webstore, but I took a chance and sent over a paypal payment for $10.00. Less than a week later, I had my copy!
Posted by Mike at 10:01 PM

I hear a lot of good things about the bands on this label. Gonna check it out myself!

I was lucky enough to pick this up at the new record store in town. Well relatively new, it's been here a few months.

It's called Hits and Misses, Mike, if your ever in Toronto it's a must you go there with a decent amount of money to blow.

Yeah the bands on this label are all pretty solid, nothing groundbreaking, just a lot of really raw old school hardcore. No Way fest was actually just a few days ago in Richmond VA, i heard it was really good.