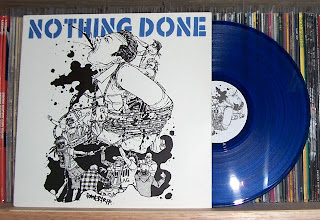 Nothing Done just released a new album on Not Just Words Records called Everybody Knows. The pre-order was limited to 100 and came with a different album sleeve. I had never heard that band before, but when you site bands like Black Flag, Negative Approach and Circle Jerks as influences then you have my attention. I checked out a couple of mp3's and liked what I heard, however I wasn't really prepared to pay the price for a record overseas...I think it would have cost me around $20. I checked the Revelation mailorder and they had a copy of Nothing Done's first LP, Powertrip, so I picked that up instead. It was a second pressing on blue vinyl and limited to 525. The record is amazing. It is so much fun. They definitely have that early 80's hardcore sound...fast and aggressive. I love it. When RevHQ carries the new album, I will have to pick it up.
Posted by Mike at 10:07 AM

These guys are amazing, their live set is incredible, so much energy!

Man, i need to hear more of these dudes, i've only heard a few mp3's and they were awesome.

Yo Mike, deos Rev take paypal yet? I would love to pick up that record.

Damn the new record is already sold out on vinyl. Luckily the boss of Shield Recordings has got some copies left so I will be receiving it this friday. I'll let you know if it's any good.

RevHQ got some of copies of the new record this week. I ordered my copy yesterday, so hopefully I'll have it by the end of the week.

Oh, and I did not see that Rev was taking Paypal....