Suffering from Record Store Day hangover, I swore to myself that I wasn't going to buy any new records for a while. I'd spent way more money than I'd intended on RSD, and I needed to chill for a little bit. Four days. I held out for four fucking days. 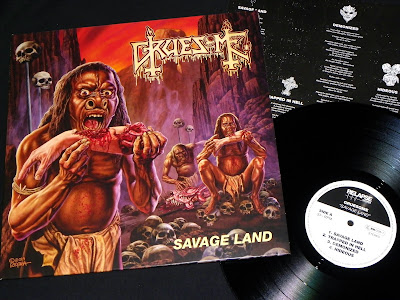 I was at work, and killing some time and checking out the latest metal news over at Brave Words, when I saw they had a Featured Video for some band called Gruesome. In passing, I might have just kept on walking, but the album art caught my attention, and I figured that I'd give the song a quick listen. I was half expecting that I'd be investing 20 to 30 seconds before quickly moving on, but I couldn't have been more wrong. This was good...no check that...it was great! I did a quick search on the website for my local record store, saw they had a copy of the vinyl in stock, jumped in my car and 15 minutes later I owned the album. Ain't modern technology and convenience a bitch? 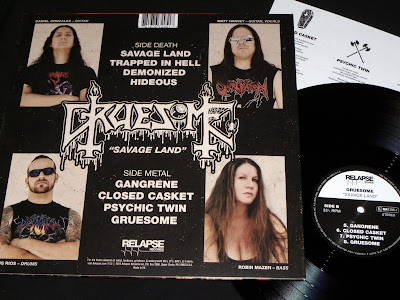 Gruesome are a straight up Death worship band, and they aim for the sweet spot of the Leprosy and Spiritual Healing years. Man, those two albums were in heavy rotation for me back in the late 80's and early 90's, and Gruesome is the purest tribute to what Death was doing at that time. The band logo, the artwork, the sound...hell, they even have a song titled Closed Casket...well done, Gruesome, well done.

I really need to get my hands on this LP.