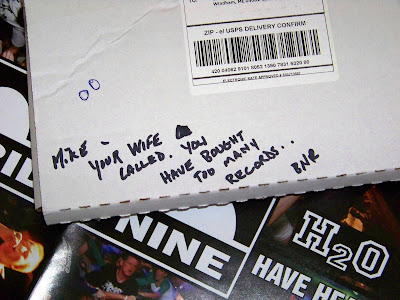 I got my Have Heart order from Bridge Nine a while ago. When I got the package, my wife had written a funny little note on the outside of the box. Jokes on her though...there is no such thing as too many records. Who's laughing now?!?! Seriously though, money is TIGHT right now, and each month I start it off by saying that I'm going to cut back and not buy as many records as I have been. By the end of the month, I'm surprised to find that I've dropped over a $100 again on new shit. The collector's motto : "Buy it now, or spend three times as much later on eBay.". 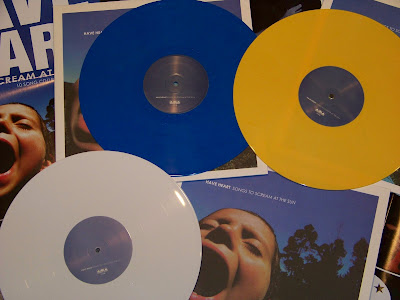 Let me start by saying that the cover for Songs to Scream at the Sun is the worst. I'm all for trying to not just have another generic hardcore album cover, but this idea sucks. Reminds me of some lame Blink 182 shit. The album on the inside however, that is a thing of beauty. While not even coming close to the brilliance that was The Things We Carry, the new album is still pretty impressive. You can tell from Pat's lyrics that his mind was on some serious personal shit. Maybe that's why it isn't grabbing me like their last album. It has taken a few listens to start to sink in, and some of the songs are really strong, but time will tell if this really grabs me.

There was some pressing plant mess with the blue vinyl, and the label found themselves with more than they had intended. They ended up shipping a bunch back, and getting 1,000 on white vinyl. This caused a bit of a delay in shipping, but I'm happy to have all three colors. Yellow vinyl is limited to 500. 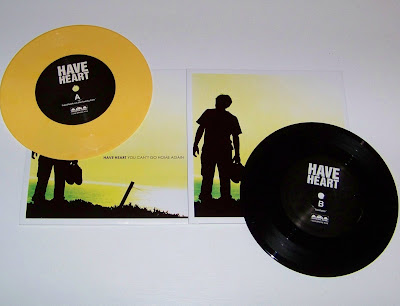 Along with the album, I also got a couple of 7 inches from Bridge Nine. I'm really not sure what the point is of these records, as they have two songs that you can find on the LP. Other than just being something additional to collect, and having a much better cover than the album, this kind of record is kind of pointless. 500 pressed on black, 1,000 pressed on yellow.
Posted by Mike at 9:56 PM

I hadn't seen the white before. But you seem to be missing clear. Get on the case dude!

One sold on ebay last week for about $107. The description claims that there are only 30 copies on clear.

I was gonna email you but can't find an address. It would be good to chat outside of blog comments. My address is on my trade list if you wanna get in touch.

I just searched ebay and found it. Holy shit. That is a lot of money. I see the S&F pressing going for over $100 as well. Sucks I couldn't make the record release as I'm sure there was a pressing for that as well.

I'll hit you up on myspace when I get home.

haha So even though you don't really like the record you still want all different versions. Damn you're a collector aren't you?

Haha but you aren't that enthused are you?

Have you already heard the Wait In Vain record, that one rocks!