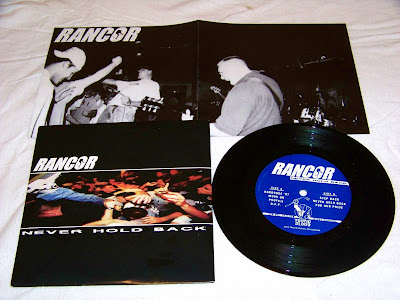 Here I am again, making a post for another record that I got some time ago, but held off on posting it because I was hoping to add more of their records to my collection. Rancor were a band from the late 90's Youth Crew revival. I've never really considered them a very well known band from that era, but their vinyl is hard to come across on eBay. I saw them one time. They played a show in Boston with Floorpunch, Fastbreak, and Ten Yard Fight. It was just as all those bands were starting to take off...I think that I had picked up the Floorpunch demo just weeks before the show. Man, everything was so exciting at that time.
This is Rancor's second 7 inch, Never Hold Back, released on Youngblood Records back in 1998. I loved the band's first record, but it was years after their second 7 inch released that I even found out that this record existed. Thank you Internet. Anyway, this one was pressed on black vinyl, and is limited to 580 pressed.
Posted by Mike at 5:20 PM

Haha Rancor records hard to find, not in the Netherlands at the time. I think Johan Reflections Records must had a whole stack cause all the Dutch edge kids had one.

That first record 'the flip the switch ep' is so awesome. I think I'm going to suggest my band to do a cover of it one of these days.

I agree about Rancor being a kick ass band. Most definately underated and under appreciated. Infact when I get home I'm gonna give this a spin.