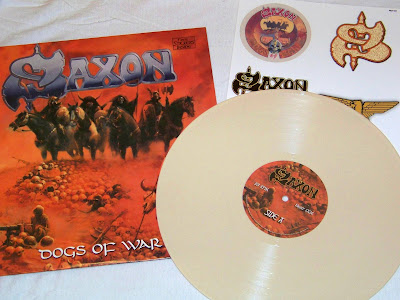 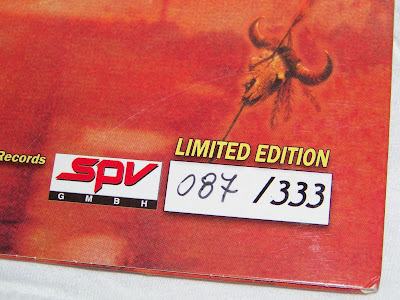 I've had this one for a few months, holding off on posting it, with the expectation that I would be getting another record from Night of the Vinyl Dead. There was a time when I was really hot to buy a bunch of releases from this label specializing in putting out some classic Metal albums that never got the vinyl treatment. You can't order directly from the label, and it seems like you can only find them in the Nuclear Blast Germany webstore where they rape overseas orders on shipping charges. I tracked down a few that I really wanted on eBay, and ended up paying quite a bit for them, but these pressings are pretty limited and sell out quickly, so I didn't mind paying extra. In the end though, it got to be too much of a hassle searching through eBay, and then hoping to place the winning bid, so I just stopped looking. They still have a bunch of releases that I hope to add to my collection, but for now I'm chasing my next obsessions.
So here is Saxon's Dogs of War album. Pressed on a nice "sandy" colored vinyl to match the album cover, this pressing also comes with a bonus set of stickers which is pretty cool and unique. While this is a far cry from Saxon's glory days of the early 80's, this album, released in 1995, isn't too bad...although, truth be told, I probably wouldn't own this if it hadn't been released on Night of the Vinyl Dead and pressed in such a limited amount. Hand numbered 87, out of 333 pressed.
Posted by Mike at 8:54 PM

The last time I saw Saxon was prolly 1990 I think. At Hammersmith Odeon in London with Metal Church as support. All I can remember from that gig was how good Metal Church were and the huge Saxon eagle stage prop that swung over the audience!