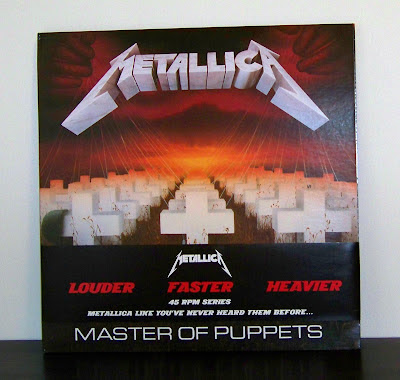 I picked up Metallica's Master of Puppets on vinyl this week. As the band is putting the finishing touches on their new album, Death Magnetic, they have been re-releasing their earlier works on vinyl. Just like Kill 'Em All and Ride the Lightning, I picked up Master of Puppets in the double LP format. The gatefold packaging is absolutely stunning, while the vinyl itself is nice and thick. They have done a great job packaging these records, and having never owned these albums on vinyl, I have been jumping at the chance to add these to my collection.

Master of Puppets was the first album that got me hooked on Metallica. Paul got the cassette tape of Ride the Lightning around 1985, and man, did we hate it. The album starts of with a thrasher in Fight Fire With Fire, and it was so over the top and fast that it just seemed silly. When the band finally released Master of Puppets in 1986, I was hearing so many good things about the band that I had to give them another try. All of a sudden something clicked. I loved the new album, I went back and checked out Ride the Lightning again, and loved that one as well. A door had been opened for a style of Metal that has been a favorite of mine for the past 20 years...Thrash.
Posted by Mike at 10:27 PM