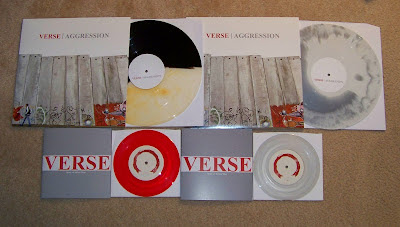 Man, I have been slacking off on keeping this thing updated and the vinyl is starting to stack up around my computer.
Pre-order season has arrived. Tons of great new records coming out over the next few months and one of the first to arrive was the new Verse album, Aggression. I love that record labels are now starting to provide digital downloads when you buy vinyl. Save me the hassle of searching Soulseek for mp3's if I'm not buying a CD copy in addition to the vinyl, and in the case of Aggression, Rivalry Records had the digital download available as soon as the pre-orders went up, so I was able to listen to the album as soon as I bought it online. The album is really good, and the more I listen to it, the more I like it. The band had their record release show on the same day that I had tickets to go see Iron Maiden with Jeff, so I had to miss out on that show and any record release merch that the band may have had. To make up for it though, it appears that I may have received one of the rarest pieces of vinyl pressed for this record.

When I received my order from Rivalry, I was confused by the black and clear/yellow split vinyl. The website only listed a black and clear split for pre-orders. I emailed the record label and Kyle, who runs it, wrote me back saying that he had never seen one that had the yellow/orange mixed in with the clear. He said that he likes to have one of every pressing, especially those that are unique, and offered me a "really good trade or money" to take it off my hands. I politely declined, but did make him the promise that if I ever was looking to get rid of it, that I would come to him first. Holy shit, I may have a one of a kind Verse pressing! Only the true record geeks would understand how exciting that is. I tried to explain it to my wife, and she called me retarded since I didn't sell it back to Kyle. In her eyes, it made sense to dump one since I already had another copy. Apparently she hasn't seen the 8 different pressings of Promises Kept that I have in collection...yeah, she would have a field day with that one.

The other Verse records that are new to the collection include the grey and white swirl of the LP, limited to 525. I also got the two pressings of the Story of a Free Man single that Bridge Nine Records released...red vinyl was limited to 700, and the clear vinyl I'm not sure, but may be limited to 500.
Posted by Mike at 10:58 AM

Mike you might have The Chung King record if this era in your hands only more limited. Better build a safe deposit box in your vinylroom.

I hopefully have an interview with Verse online by august.