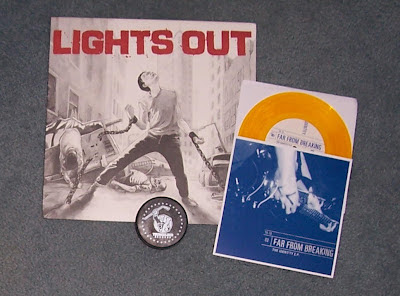 Lights Out released their Overload album in 2005, yet it took me until the middle of 2007 to finally appreciate how great this record is. I don't know what took me so long. Maybe with all the music I had coming in, I never really took the time to give it the attention that it deserved. Just listening to it here and there, until one day it just clicked and I was blown away. I saw this band twice. Once in Maine with Stand & Fight, Blue Monday and Desperate Measures, and then again at the Planet Metal record release show. Both times I didn't know one song that they played. Man, I missed out.
Tyler dropped me a line that Youngblood apparently found 10 copies of the Overload album in the YBHQ basement, and had them up in the store. I immediately checked online and ordered myself a copy. Black vinyl, 525 pressed. While I was shopping I also picked up the third pressing of the Far From Breaking 7 inch, which is limited to 350 copies on gold colored vinyl. For the 10 year anniversary, Youngblood made 200 hockey pucks. As this record label continues to impress me, I picked one of those up as well.
Posted by Mike at 7:47 AM

That Lights Out record is just incredible, it gets better with every listen. My brother and i learned "Trapped" today and played it a few times since i'm home for reading week. Man, that song is relentless.

Those pucks rule too, next time i order something from them i need to pick one up. Great label and an awesome logo, and hockey rules.