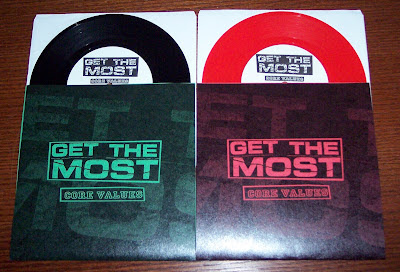 Man, I was really hoping for the gold pressing of the new Get The Most record. This is the bands demo, finally pressed to vinyl and it was released on React Records, which is Aram's new label. In true collector-geek fashion, it was pressed in very limited numbers for the three different colors. By the time that I saw that the vinyl was available for pre-order, the gold pressing was sold out. I had spoken to Aram at the Edge Day show and he had let me know that he would hook me up when the record was released, so even though the gold vinyl was sold out when I placed my order, I still had a little hope that I may find it when I received the package in the mail. Oh well, it didn't happen, so my next mission is to continually search eBay, waiting or one to show up for bid. Still, I feel good about the two that I did get, limited to 150 on red and 250 on black.
Posted by Mike at 1:26 PM

I'm sort of bummed i didn't order this record. I'm so behind on my Get The Most collection it doesn't really matter at this point