War With The Electric Guitar 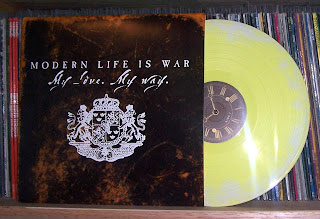 I finally own a copy of Modern Life is War's first album, My Love My Way. I had downloaded it about a year and a half ago, but it wasn't until now that I finally purchased it. When Lifeline Records repressed it, I figured that it was a good time to order a copy and try and get some limited pressing. I got the white and yellow swirl vinyl, limited to 300 pressed. I've seen this band a couple of times, and both times I was blown away by how intense they are live. I don't think that same level of intensity carries over well to their recorded stuff. I think that I just haven't listened to them enough to really get to know the songs. I'm sure that over time, this band will start to sink in, and I'll appreciate them more.
While I was buying the Modern Life is War album, I saw that the Lifeline webstore also carried an album by the Regulations. I had wanted to buy this from the Youngblood store a while back but they had sold out of them. I was glad that I was able to order the vinyl from Lifeline, and took a chance on this Swedish band. They have a great early 80's punk rock sound...I can hear a definite early Circle Jerks / Adolescents influence. Very cool. 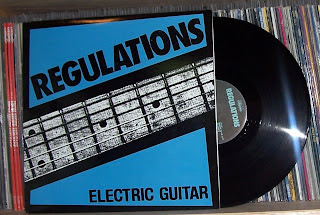 I have that same repress of My Love, My Way. I'm really interested to see what the new record will sound like.

Regulations are a band that i've slept on for a long time. i should probably go buy one of their records or download some songs.

They played here in the fall with that whole hidden world weekend fiasco, i only bought a ticket to the night that RJ was supposed to play, i've heard so many good things about the Regualtions live i'm kinda bummed i missed out on seeing them.