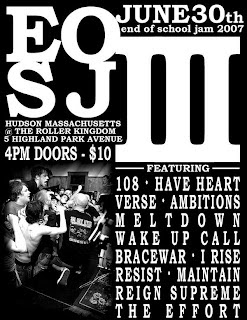 I took a trip down to Massachusetts for the End of Summer Jam III. Rob and Paul couldn't make it, so I took the trip alone. I was a little disappointed with the line up...there were a bunch of bands that I hadn't heard before, and a couple that I didn't care about. I still went because I really wanted to see Verse and Have Heart again, plus it would give me the opportunity to check out some newer bands, and I was hoping for some special EOSJ vinyl pressings. Once the doors to the place opened up, I headed straight to the merch tables. What a disappointment...not one EOSJ pressing to be seen. 108 had their record release vinyl with them, but I not too excited about that band. All that I picked up was a Japan tour shirt from Have Heart, the Rebuild CD from Verse, and the Soul Control / I Rise split 7 inch. I didn't spend nearly as much money as I thought that I would. The first band, The Effort, were pretty good. This show was their one year anniversary, and they weren't bad for a new band. They already had a 7 inch for sale and all I could think of was that too many bands release records before they should. Come on, if your band is only one year old, you probably aren't ready to have a record out. It still may be good, but I didn't pick it up on principle. Resist had a good set, and the new songs for the Indecision Records release sounded really good. Wake Up Call were amazing. They owned that stage and deserve to be huge. It was the first time that I had heard I Rise. They were really good, and it prompted me to buy their split 7 inch with Soul Control. I'm looking forward to their next release on 1917 Records. Verse were really good, and Soul Control played a couple of songs to begin the set. I did get to see Sweet Pete and talk with him about the Have Heart tour of Japan that he tagged along on. Those were the only highlights for me. As the night went on, and I sat through shitty band after shitty band, more and more I wished that I had stayed home with the kids who were upset that I was leaving for the day. By the time 11:30 rolled around and 108 was going on before Have Heart, I was so tired, hungry and sick of watching kids kick and punch there way to the edge of the crowd that I said 'fuck it' and went home. I really wanted to see Have Heart, but the thought of having to sit around for another hour before they went on, and not getting home until 3:30 in the morning did not sound good to me. I needed to be up early the next day to start wiring the new construction on my house, and did not want to be drop dead tired the next morning. The show went on too long with too many bad bands. Hopefully it will be better next year and I don't end the night as a cranky old man. 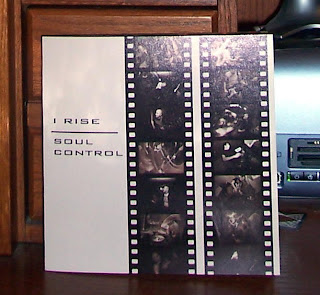 Resist is the new band with Wrench right? Is it better than Stand and Fight?