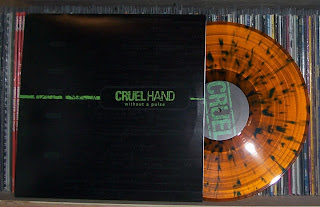 Another pre-order has arrived! Last week the mailman delivered Cruel Hand's new LP, Without A Pulse. The vinyl is on orange with blue splatter, and limited to 300. The singer of the band used to play guitar in Outbreak, and while the band plays some pretty thrashing hardcore, there isn't much similarities between the two bands, with Outbreak winning the contest hands down. First saw the band when Rob and I went to the End of Summer Jam last summer, and while I thought they were just okay at that show, I had some high hopes for the album. All in all, it is a pretty average outing.

Speaking of cruel hand...my Boston Celtics were dealt one last night with the NBA lottery. They had one of the better chances to draw a top two pick and they ended up getting the number five pick. The team had some serious issues last season, and when Paul Pierce went down with an injury, it was damn near impossible for them to pull out a win. I had high hopes for this lottery and when their name was pulled from the envelope at number five, my heart sank. I'm imagining that the team will look very different at the start of the season. Either the pick, and some young players (maybe Gerald Green) will be traded away to provide Paul Pierce some veteran help, or Pierce will be traded and the team will be starting from scratch and building around Big Al Jefferson. Either way, I'm nervous that next season will bring more of the same disappointing loses as last year. 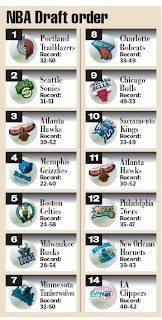 I've never even heard Cruel Hand yet, are they worth checking out?

As for your Celtics, they did get the raw end of the deal in the lottery. That said there have been plenty of quality players taken at number 5 in previous years. So if they draft well it could be a blessing in disguise.

I would trade Pierce and rebuild, get a good young player or a pick. From what i saw of the Celtics last year i don't think their going anywhere with Pierce. They need to remain at least relatively competative though, so it's a tough call.

First couple of listens of the Cruel Hand LP didn't do too much for me. After posting about it, I played it again and it started to grab hold of me. Angry hardcore...maybe like Ceremony with longer songs.

Yeah, with Pierce out with an injury last year, the C's were unable to get a win without him. It was pretty pathetic, so I'd worry what would happen if he was traded. Good thing the summer will give me a break from the NBA, so I can refresh and be excited by the time next season rolls around.