Nothing Done and Knife Fight 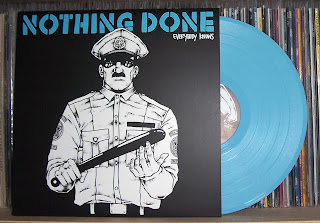 As soon as I got the mailorder update from Revelation that listed the new Nothing Done album, Everybody Knows, I immediately placed an order. Their last album was so much fun, I did not want to miss the first pressing of the new record. It does not disappoint. Amazing thrashy hardcore. 10 songs in 13 minutes. Limited to 500 on baby blue vinyl.

While I was shopping on REVHQ, I saw the new Knife Fight album, Crisis. I had never heard the band before, but from checking various messageboards, there was certainly a buzz about them, so I took a chance and ordered the album. The chance didn't really payoff. There is certainly some potential in the songs, they are ripping fast, and there are some catchy choruses, but a lot of it is lost is the muddy production...kind of disappointing. 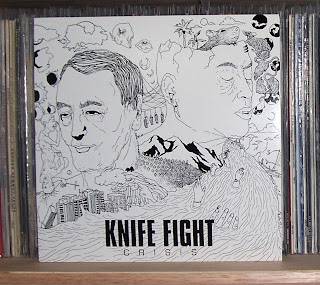 I talked to the singer of Nothing Done at the Negative Approach show and he told me songs for a split and another full length are already written. They should be even better than this one!

Another full length already? Damn, those guys can churn the songs out, can't they?