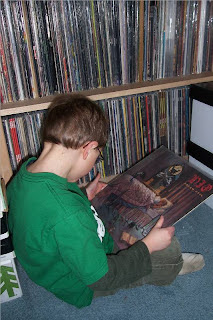 When I had kids, one of the biggest things that I looked forward to was sharing my love of music with them. I hated the typical kids music, and instead chose to introduce mine to Black Flag and The Misfits. By the time Sam turned 5, he really was getting interested in music, mostly early Heavy Metal and Hard Rock from my collection. The first band that he really latched onto was AC/DC, and his favorite songs were If You Want Blood, TNT, and Jailbreak. He would listen to those songs over and over again. Slowly he found interest in a few other songs, like Black Sabbath's Iron Man and Deep Purple's Smoke on the Water. I love that Sam is so interested in music...good music. Every once in a while he will want to go through my CD's and albums, pulling out the ones that he knows, and studying the album covers that he thinks are cool.
Since I had this picture of Sam looking at my vinyl collection, I needed to find one of Julia that I could post as well. I was digging around and found this picture from 2002. I had an Impact (later to change their name to Stand & Fight) sticker that I put on the front of her shirt, X'd up her hands, and we had a good time screaming into her toy microphone. 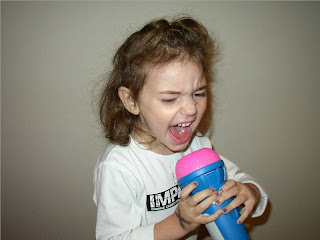 Mike can you write a guideline, I want to raise my kid the sameway. Only instead of hard rock he should learn to listen to a lot of punk!

I tried some punk at first, Gimme Gimme Gimme by Black Flag and 20 Eyes by The Misfits were the easiest for them to pick up on, some Ramones stuff too. I just think that most of the Metal/Rock that they listen to is more accessible with a catchy chorus...

Well then youth crew should work, what's harder then

I'll let him start with some Ramones and keep the American Nightmare songs for when Jelle is a bit older.