One Man's Trash Is Another Man's Treasure

I got a message from Jeff the other week...he had decided to clean out his record collection, getting rid of doubles and stuff that he no longer wanted. He was planning on putting a large number of records up for sale on ebay, but he offered to give me first crack at them. I wasn't sure what I would find, but he gave me a $2.00 price tag on everything, so I was looking forward to a little shopping.

Jeff ended up having lots of Metal up for sale, and I found more records than I was expecting.

Some stuff I picked up because it was in such mint condition, and some stuff I took a chance on.

Then there were the records that I was especially thrilled to get. A steal at $2.00 a piece. 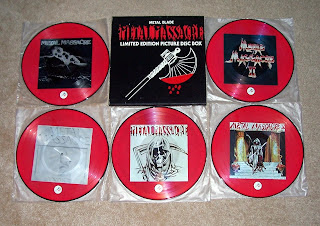 Other than the Slayer record, there was one other record that I was hoping Jeff would have up for sale.

There were so many other records that Jeff was selling that I wanted, but at $37 for the lot, I had already spent more than I was planning on. He still had a section of Metal that he had yet to sort through, so I am looking forward to going back and taking more cool shit off his hands.