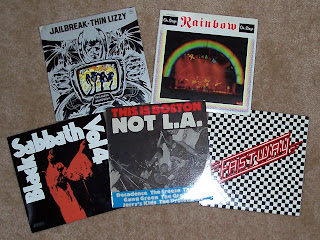 Another stop on the Jeff and Mike record shopping spree was Enterprise Records in Portland. I had been here one other time, about a year ago with Rob, so I had high hopes that the selection would be as good as the last visit. It met my expectations, as I wasn't able to afford everything that I wanted.
Posted by Mike at 4:25 PM

I actually bid on the This Is Boston, Not L.A comp. I tapped out at $25. I did win Down To Nothing's s/t on purple marble for $11 which im pretty happy about.