Ruthless were a Metal band out of Los Angeles in the early to mid-80's. The band never landed on the bigger labels, like Metal Blade or Combat, at the time, so their name never appeared on the radar of this teenage metalhead living across the country in Maine. 30 years after their first release, I heard some praise for Ruthless, and since I was on a huge Traditional Metal kick, I figured that I'd check them out. 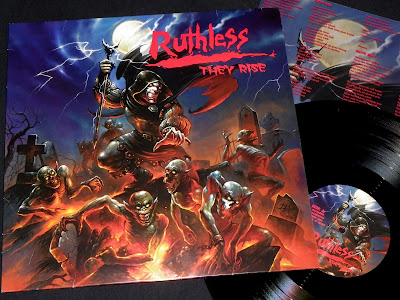 I can't remember where I first heard the recommendation to check out Ruthless, but it prompted me to do a quick search on youtube while I was at work to see if it was something worth pursuing...because you know there is no better distraction while stuck in your work cubicle than checking out new music. As soon as I'd heard the first song, Defender, I was sold. This shit would have fit perfectly beside my Grim Reaper and Omen records back in '85. It is hard to believe that it has been nearly 30 years since the last Ruthless record. Old metal dudes rule. 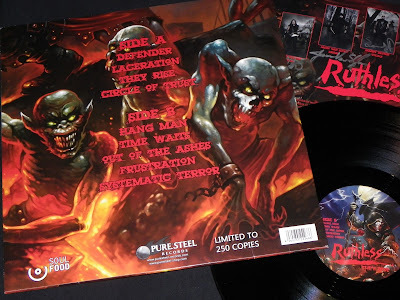 After hearing one song from the album, I was hitting the internets, looking to hunt down a copy of the new album on vinyl. Initially, I was a bit disappointed because I thought I was going to have to pay for overseas shipping, but after digging in a little deeper, I found that the band had some vinyl for sale direct and from The States. I was sold and immediately grabbed a copy from them. 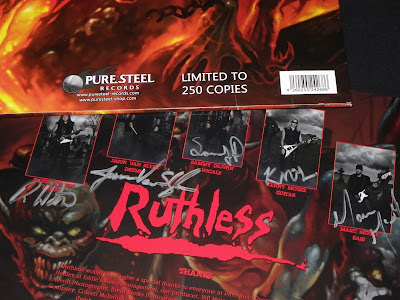 A few days after ordering the vinyl, I had an email arrive, asking me if I wanted the band to sign it for me. I don't typically give a shit about someone scribbling their name across my record covers, but something about the offer was attractive to me. I replied back that if the band wanted to sign the insert, and not the cover, that would be cool. Since it was a free offer, and not some rockstar bullshit where they were attempting to soak the fans for a few more dollars, it was a nice bonus.

Limited to 250 pressed to vinyl.

That's awesome that it's signed. I don't typically like signed record but a signed insert is cool. You couldn't turn that down