Something funny happened recently. After a two year obsession with Metal, I've recently started queuing up late 70's and early 80's punk in my daily playlists. The Damned, The Adicts, G.B.H., Articles Of Faith, Naked Raygun...I currently can't get enough. Don't worry, Metal still gets plenty of playing time on the stereo, but right now, I only want to buy punk records. 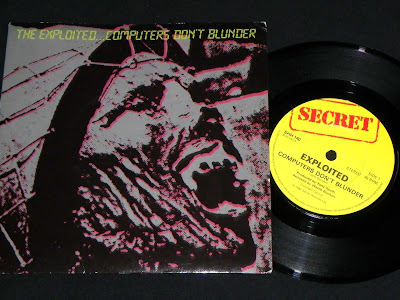 When I started thinking about what punk records I should start chasing, at the front of my mind was the collection I started last year for The Exploited. It was left fairly incomplete, so I set out to see what was kicking around out there on eBay. Finding a copy of the Computers Don't Blunder 7 inch from a US seller at a decent price was an immediate buy. 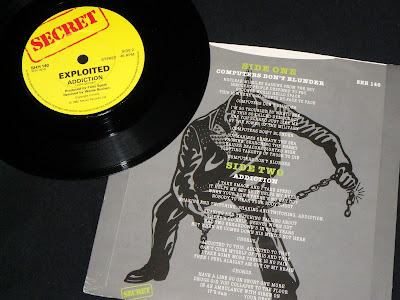 When I started checking out singles from The Exploited last year, I discovered that there were a handful of songs from the band's early days that I'd never heard before. Here we are, 34 years after it's release, and I'm finally hearing the two songs from this Computers Don't Blunder single for the first time. A part of me is glad that I missed these songs back in the 80's, because finding them now is like finding a long lost treasure. Amazing.