Buy The Best...Fuck The Rest 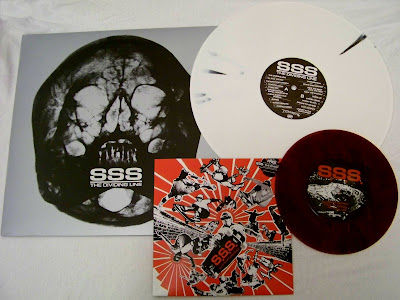 I'm not sure if I would classify them as Hardcore or Metal...but either way SSS fuckin' rule. I've been looking forward to the release of their new album, The Dividing Line, but I had not been able to find it in any stores. I emailed Thrashgig back and forth a few times, but I never really got a final price from them on what it would cost for me to pre-order the new album along with some other pressings of the first album. Finally, I said "fuck it", and just went to ebay. Found the album in the Earache ebay store...but not just any regular pressing...no, I found they were selling the special Splatter Set (although mine is lacking in a lot of the splatter pattern), which is limited to 100. It cost about twice as much as the regular color pressings, so I know that Earache was probably just looking to squeeze some extra cash out of the collectors, but screw it, I bought it anyway. The album is better than I had anticipated. 20 songs of kick ass thrash. Plenty of songs about skating (Skate and Destroy, Ride the Best) sure give it a genuine old school feel. The 7 inch that came with the album features some antics from Frank Sidebottom. I had no idea what a Frank Sidebottom was, so I did a search on youtube....what the fuck?!?!!? I'm not sure what to make of him...some dude in a mask singing these absurd simple songs...I don't know if it is for a children's show or what...friggin' bizarre. Anyway, Frank does some funky intros to a few of the songs on the 7 inch, and then does an interpretation of his Christmas song about SSS. "SSS is fantastic in the morning, SSS is fantastic in the evening...". Like I said, friggin' bizarre character...but on the 7 inch it comes across as pretty funny. Get this record and thrash. 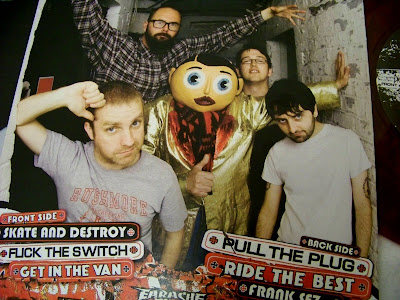