April 19th was officially Record Store Day, and had now topped Christmas as my favorite holiday. While I unofficially celebrate the holiday a couple times a month, this day was specifically designated by the independent record store. Locally, I've got a handful of these independent record stores, and I sometimes forget how lucky I am to have so many options. I check messageboards and read about other people ordering everything online with Best Buy as their only option for record stores. That is truly sad, as there is nothing like browsing through a store and hunting for some kind of treasure. I made sure that I showed my appreciation for these local stores and Jeff and I planned on hitting them up on this holiday. 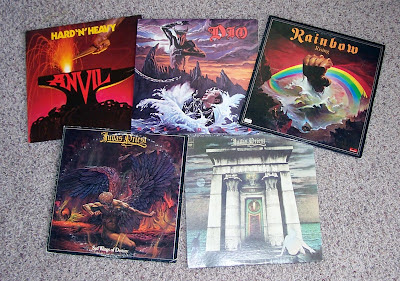 Our first stop was Enterprise Records in Portland. Before we got there, Jeff stated that he didn't really like this store because of the owner. Then while we were there, and Jeff was pulling some vinyl out of the sleeve to inspect the quality, the guy told him that there was no reason for him to check them as they only buy quality records. This certainly rubbed him the wrong way, and it got me laughing to see the guy irritate him. Anyway, this is one of the best places around to pick up some used vinyl at a decent price, and I sure walked away with my fair share. 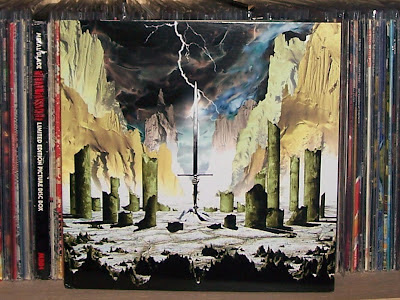 After our trip to Enterprise Records, we stopped in to Newbury Comics. These guys new how to celebrate the day by offering 15% off on all vinyl, and 35% off on all used CD's. Damn, how can I not show my appreciation for that! In addition to a few CD's, I also picked up the new album by The Sword. Packaged beautifully with a gatefold cover, this thing looks as great as it sounds. Only a metal band could get away with a song named Fire Lances of the Ancient Hyperzephyrians. After Newbury Comics, Jeff and I took a trip over to Bull Moose. While they had no sales, they did have free candy and sodas to go along with the two new CD's that I bought. Truly a great day.
Posted by Mike at 5:04 PM