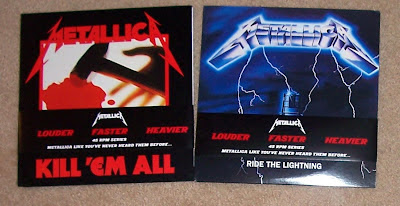 There are some records that change everything. Metal was introduced to the world with Black Sabbath's debut in 1970. Iron Maiden led the charge into the '80's with the New Wave of British Heavy Metal. In the early 80's, Metallica was one of those bands that decided to kick things into a higher gear, determined to play louder, faster and heavier than anyone else. Their debut, Kill 'Em All, and the follow up, Ride the Lightning are metal perfection. They made music for themselves. Total fucking attitude.
They recently re-released those first two albums, each one released as a double LP on 180 gram vinyl. They come packaged with a gatefold sleeve, and both of them are just ridiculously sweet looking. Since my local record store failed to carry the new vinyl on the day it was released, I ordered mine directly from metallica.com. Worth every penny spent.

"If you came here to see spandex, and fuckin' eye make-up and all that shit...and the words 'rock n roll baby' in every fuckin' song...this ain't the fuckin' band. We came here to bash some fuckin' heads for 50 minutes. Are you fuckin' with us?"
- James Hetfield at Castle Donnington in 1985-
Posted by Mike at 7:39 PM