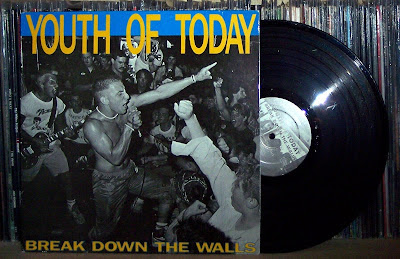 I recently sold one of my records, and made a very nice chunk of change in the process. I really hate parting with anything from my collection, and it's why I make a terrible record trader. I really can't part with anything, because I fear that I'll regret it at some point down the road. Therefore, I hold on to everything. This one record however, the price was very high, and it was one that I really never cared about, so I made the jump and sold it on eBay. Once I had the $350 in my paypal account, I was ready to go on a shopping spree. My initial reaction was to use the money for a nice rare Hardcore record. I made an attempt to get a first pressing of Youth of Today's Can't Close My Eyes. I lost the auction as the record ended up selling well past my maximum bid of $65. I really wanted an original pressing of a Youth of Today record, but at the end of the day I figured that the smartest move was to really put the money towards the new addition we are doing on the house, and buy some shelving for my music room.
However, I was not going to just walk away without buying something! I was watching another auction for Youth of Today's Break Down the Walls. It had the original cover, and looked like it was in mint condition, so I was surprised when I won it for only $5. When I recieved the record, and slid the vinyl out of the sleeve, I noticed the label on the record had Ray decked out in some Krishna gear. I thought it was odd for the Break Down the Walls album, since I didn't think that Ray got into the Krishna thing that early. Upon further investigation it appeared that the vinyl was from the 1992 reissue the Revelation Records did, and not the original pressing. I had heard that Rev had thrown some new vinyl in with the old covers that they had lying around, and it appears that was what I got. I was kind of disappointed, but hey, at $5.00, I'm not going to cry too loudly. So here I sit, still without an original Youth of Today pressing.
As a side note, the one and only time that I saw Youth of Today was at one of their reunion shows. Paul, Rob and I took a drive down to Pennsylvania for the Knife or Death fest in 2004. A ton of great bands played, but I was really looking forward to seeing Mouthpiece and Youth of Today play. The place were the show was held decided that they didn't want the bands swearing on stage and there was NO STAGEDIVING. I was really disappointed, but still had a lot of fun getting up front and screaming along. Unintentionally, this trip kind of kicked off our annual tradition for the Guys Roadtrip. 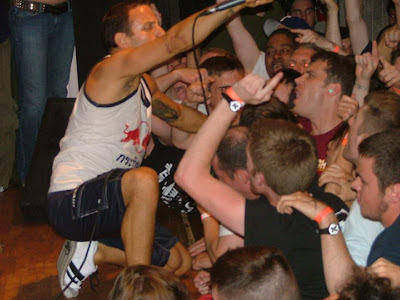 Great blog. A few years ago I bought a copy of Bold's Speak Out on vinyl (Rev 09) for $2. How can you tell if it's an original pressing?

Pressing info for the Bold record can be found here http://revelationrecords.com/index.php. I need to get this one on vinyl at some point!