The Most Unbreakable Record Release 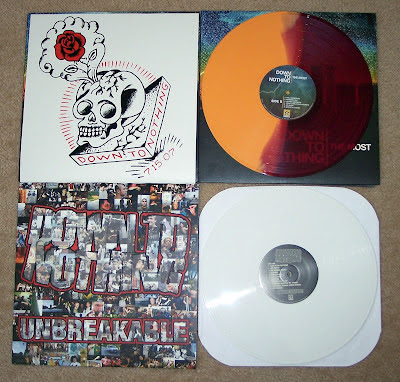 Over the past year, Down To Nothing has become one of my favorite bands from today's scene of straight edge hardcore, and The Most was easily one of my favorite albums from 2007. I had two different pressings of the album and I was happy to pick up my third copy when Revelation Records released it again, this time on purple and orange colored vinyl (limited to 525 pressed). Shortly after the second pressing of The Most, Revelation also released Unbreakable. This new record is just a compilation of the albums that Thorp Records had released, Save It For The Birds and Splitting Headache (which itself was a compilation of 7 inch recordings). My copy is on white vinyl and limited to 330 copies.
The other Down To Nothing vinyl that I picked up recently was a copy of The Most, from the bands record release show. I had resigned myself to not buying any new records for a while, when Rob sent me an email with a link to an ebay auction on a Have Heart record. It was a copy of the Have Heart 7 inch that the two of us had bought at the Posi Numbers show in 2005, and he was wondering how much it would go for. I had noticed some records going for ridiculous amounts of money recently and I started looking around ebay to check prices on stuff. I have absolutely no interest in selling anything from my collection...ever, but sometimes I surf around checking to gauge where prices are. To my surprise I came across this Down To Nothing album from their record release show and the tempation was just too strong. The record was limited to only 50 made (this one was number 13), and suddenly I needed to own it. If I didn't, I was afraid that I may never see one available again and would regret not buying one when I had the chance...just part of my collector paranoia. So I was very happy to win it, and at a pretty decent price for such a rare item.
Posted by Mike at 2:44 PM

That record release copy of The Most looks awesome. I can't believe some of the prices i see on eBay for hardcore records, it's out of control as far as I'm concerned. I'm too cheap to spend a lot of money on records so i get pissed when i get outbid and refuse to go any higher.

I know what you mean...last week there was a solid yellow pressing of the Have Heart demo that sold for over $30. That's crazy...the record was just released a couple months ago, and is limited to 300.

You know that friends press of the latest GIA record i got..... i saw that going for well over $50 and it still had 3 days left on it.

I believe that I saw the PIB friends press go for over $100 a few weeks ago.