The fourth annual Guys Roadtrip. The first year the three of us made the trip to Pennsylvania for the Knife or Death fest with the Youth of Today and Mouthpiece reunions. Next year, Paul had just had a baby and couldn't take the trip, but Rob and I made it back to Pennsylvania for the last Posi-Numbers fest. Third year was our trip to Toronto for the Red Sox/Blue Jays game. This year it was decided that we would spend the weekend in New York City and catch a Mets game. I don't really care about baseball, but a weekend spent hanging out with Rob and Paul is always a good time. For our trip, I was really looking forward to hitting some record stores. Our first stop was Generation Records. Holy shit, I could have blown so much money in this place. They had a huge room that was strictly dedicated to vinyl. The place was amazing. The only way for me to get the most out of it was to start at A and work my way through the entire rack, thumbing through them one at a time. It took a lot of restraint, but I controlled my spending and only got 3 albums (and got 3 that Paul bought me for Christmas).

After Generations and a bite of pizza, where I managed to drop a good sized drop of tomato sauce onto the crotch of my tan shorts, we made our way to the infamous Bleecker Bob's. I had heard such stories about the cranky owner that I was a little nervous to enter the store. Sadly, I didn't really find much that interested me...and what did interest me was grossly overpriced. An original Overkill Fuck You EP for $35, and an autographed Kind Diamond The Portrait for $100 were a bit pricey for me. 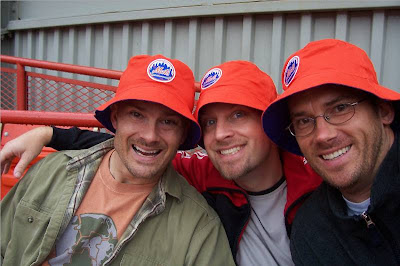 On Saturday we caught a Mets game at Shea Stadium. Having only experienced Fenway Park, I would have to say that Shea Stadium was awesome. I can't understand why they are building a new stadium to replace this one. We had great seats...field level but in the back row, so we could stand and come and go as we pleased without disturbing the entire row. The game was fun, and it was Bucket Hat Day, so we all got our free hats. After the game, we went back into the city and had dinner at Serendipity III, which was a very cool restaurant that Paul wanted to go to. I think the only vegetarian thing on the menu for me was the ravioli, but damn, it was so good. We also had the house specialty of a Frozen Hot Chocolate, which was definitely a treat. 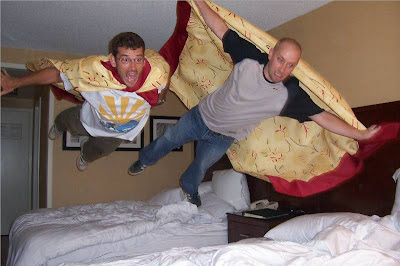 The weekend was so much fun, from hanging out in the city, avoiding the puke on the subway, and the conversation of drunk girls on the same train ride, to goofing off in the hotel room and jumping from bed to bed trying to get pictures of each other airborne (most people don't seem to understand just how funny this was). We walked for miles and miles through the city, with Paul getting the attention of homeless people and starving Hip Hop artists looking to sell their CD's. We laughed the entire three days. Good times.

Looks like you had a fun time. I'm surprised they had that pressing on the No Turning Back record, i think that's the pre-order color. I really like that record Aram's vocals are an added bonus.

I really need to check out regulations, i saw them live about a year ago but haven't taken the time to get into them.

I was surprised when I got home and opened it and saw the colored vinyl, because I thought that it was the same color that you had posted about a while back.

...oh and I love that Aram drops the words "Substance" and "Betrayed" for the part that he sings....

Yeah, that NTB record is the same as mine.

Haha, that part is awesome. I remember when i first heard it i didn't know Aram was going to be doing guest vocals. I had to listen to the song once more to figure out who was singing.

You guys seem to like dutch hardcore more than me haha. No Turning Back, come on... haha. That compilation album sounds kool, I will download it soon. Plus I totally understand the airborne thing ;-)

You prejudice against Dutch people? :)

Onno is from Holland ;)