When True Identity released their demo five years ago, I was hopeful that we were going to hear more from the band. Featuring a couple dudes from Champion, these songs were exactly the kind of hardcore that I wanted from them and I wanted more. That never came to be as shortly after the release of the 7 inch, their singer was accused of some sketchy shit and was basically kicked out of the scene. 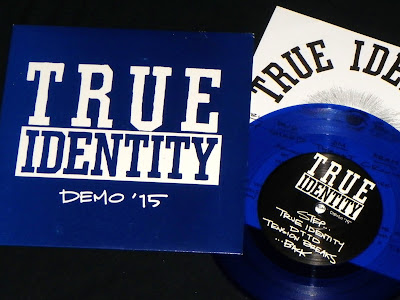 When the demo was released on vinyl, it was a split release with both React and Refuse Records. I quickly scooped up the gold and black pressings from React, but I decided to wait on the Refuse blue vinyl pressing. Instead of paying the overseas shipping fees, I'd just wait until the blue vinyl showed up on U.S. shores, and I'd grab it then. Shortly after the release of the 7 inch, the Jim Hesketh controversy hit and I expected that a bunch of kids would be dumping their records on Discogs and I'd be able to scoop that blue vinyl for cheap...but that never happened. 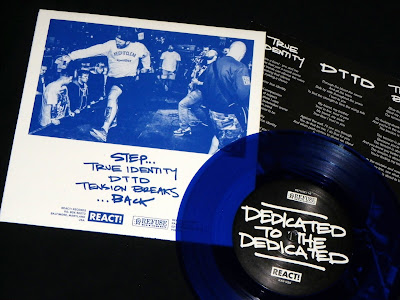 Here we are, five years later, and I'm finally picking up that True ID record. When I was buying the One King Down record from David Salad Days, I noticed that the had the blue vinyl for sale as well, and it was finally time for me to cross it off my Want List.
Posted by Mike at 6:04 AM

If I'd have known you wanted one of these I would have given you one. I bought 3 when it came out thinking it might be good trade material. I think I sold or gave one away, but definitely still have one spare. Oh well!