I was extremely late to the party when it came to the UK Subs and some how did not hear the band until 2016. I was heavily into the late 70's punk sound that year, and I was hungry to check out just about any band from that era. When I finally got around to listening to that first UK Subs album, Another Kind Of Blues, I instantly fell in love with the band, and that record became one of my favorite discoveries that year.

It took me some time to finally getting around to checking out the second UK Subs album, Brand New Age, and after downloading a copy, I really wasn't feeling it. It sounded really muddy and I wondered if I'd downloaded a shitty copy of the songs, but after checking a couple other options on Soulseek, they all just sounded muffled and I couldn't totally get into it. 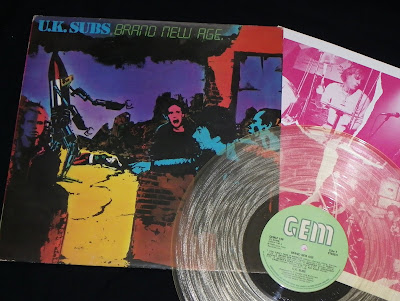 I ignored the album for a year or so, until I decided to finally give it another shot a couple months ago. I noticed that the album was on Spotify, and figured that it might be more reliable than the downloaded version that I had, and I queued it up. Well damn, it finally clicked and I was fucking loving the record. Despite having only really discovered the album two months ago, it is already one of my most listened to records this year. 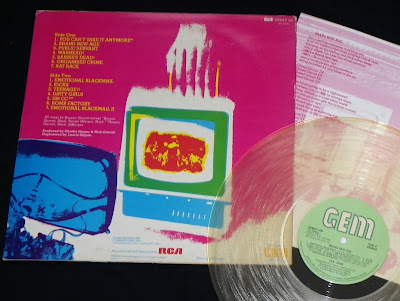 I love UK Subs colored vinyl and had to go with the clear option for Brand New Age. I'm not sure how many bands were playing the colored vinyl game back in the late 70's and early 80's, but the UK Subs albums and singles look amazing and make them fun to collect. In addition to this album, I wanted to grab some of the 7 inch records from the band as well...however, some international orders are seeing significant delays due to the global pandemic, and until things calm down a bit, I've backed off from ordering from overseas sellers. For now, I'm just happy to have received this album from the UK.