From Fear To Eternity

Iron Maiden released their From Fear To Eternity album back in 2011, and while I generally don't care about "best of" albums, that cover art looked so damn good that I wanted one for the collection. About 8 years later, I finally grabbed a copy. 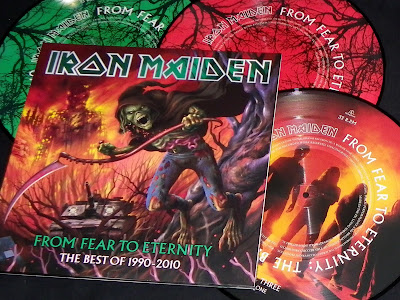 From Fear To Eternity is a compilation that captures the "best" Maiden tracks from No Prayer For The Dying to The Final Frontier, and is kind of a companion record to the Somewhere Back In Time comp, which is the best of Maiden from 1980 through 1989. As I mentioned, I tend to leave the Best Of albums for your grandmother, and isn't anything that I'd be interested, but hey, I do love me some Iron Maiden. 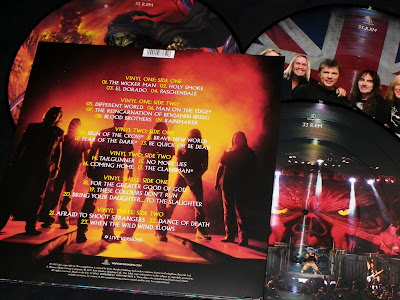 The songs on this three record set are all great, and while there is definitely a division between Maiden's classic era of the 80's and the later day stuff, I'm in love with each, and looking at the track listing here gets me excited to listen to some of the more recent albums again. I'm not too excited about the picture disc format here, but really, who cares, it's not like I'll be spinning this very often...it is more of a collection piece for the completist.

Yeah, it sounds as shitty as you'd expect, with all the background noise you'd expect from picture discs...but the packaging is top notch.