I've had a lot of irons in the fire this year. I've wanted to grow my NWOBHM collection...I was obsessed with records celebrating their 30th anniversary from 1989...I've had a blast chasing some 80's hair metal records that I ignored when I was a kid...and because of all these different targets, I've spent very little time focusing on my list of Top 10 Wants that I put together at the beginning of the year. I knocked two of them from the list early, and was feeling pretty good, but since then, I've made no progress. 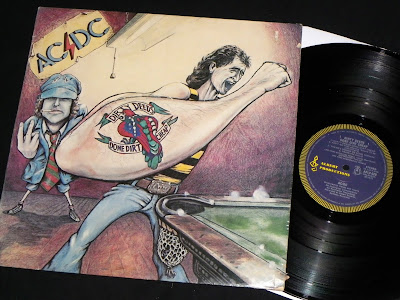 For the past few years, I've included original Australian pressings for the early AC/DC records. While they tend to carry a hefty price tag, they have been a priority for me. So before we lose too many more months this year, I needed to get off my ass, and get the job done.

The heavy hitters are the first four AC/DC albums. I've already picked up Australian first pressings for T.N.T. and Let There Be Rock, so I was already 50% there. In the game of trying to figure out which one I was going to pick up next, it all came down to availability and cost. In the end, Dirty Deeds Done Dirt Cheap happened to be the winner for this year. 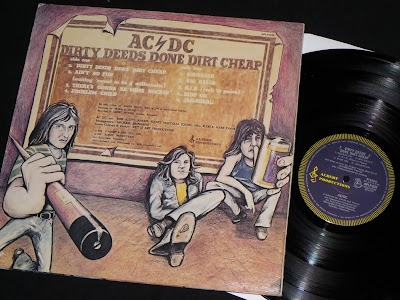 One of the big draws for me with the Australian pressings for the early AC/DC records is the artwork for the cover. It is so different from what we saw in the States.

Dirty Deeds also has a couple changes with the track listing. The US pressing had songs like Rocker and Love At First Feel, while the Australia pressing had Jailbreak and R.I.P. (Rock In Peace). So obviously, you have to have both. 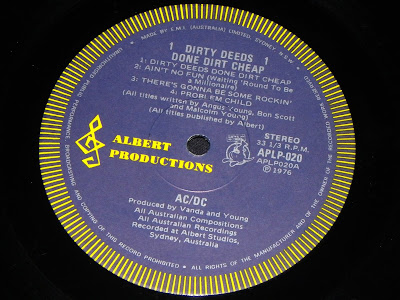 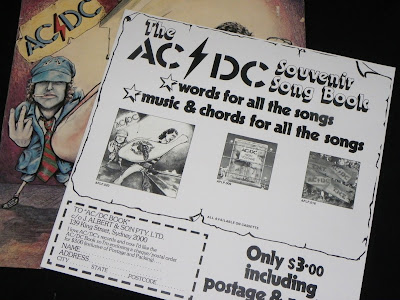 As if collecting these original Aussie pressings for AC/DC wasn't difficult enough, when I was buying Dirty Deeds, I also had to make sure that it came with the original "song book" insert. Another cool piece of history.