I knew that Twisted Sister were around for years before the UK label, Secret Records, gave them a chance to release Under The Blade in 1982. What I didn't know, was that prior to that album, the band had self released a couple of 7 inch records. When I was watching the great documentary We Are Twisted F***ing Sister, I was surprised when they flashed two 7 inch covers on the screen that I had no idea they existed. Immediately I checked Discogs, and added them to my Want List. 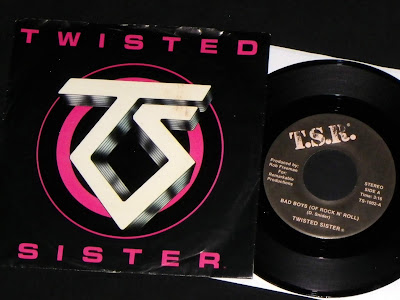 The early Twisted Sister 7 inches carry a decent price tag, and are a bit harder to find, so it took me over a year to finally pull the trigger on one of them. The Bad Boys (Of Rock 'n' Roll) was released in 1980, and was Twisted Sister's second 7 inch. Very cool to finally hear the b-side song, Ladys Boy, around 38 years after it's release. 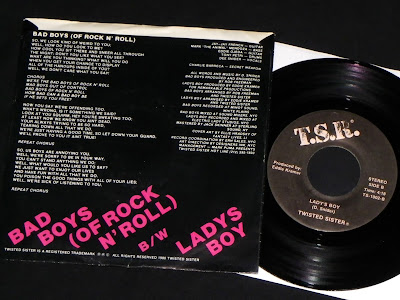 I mean, can you imagine what it would have been like to have been in that scene at the time...seeing this insane band, that was relatively unknown outside of the New York/New Jersey area, watching them play these smaller clubs, and picking up one of their records from the merch table. I don't know. As a quiet kid out of Maine, knowing that shit like this was going on when I didn't even hear of Twisted Sister until around 1984 with MTV and Stay Hungry...history like this continues to blow my mind.