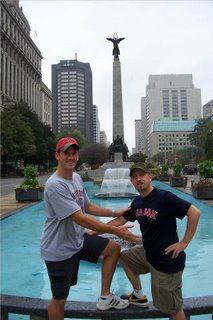 ROADTRIP!!! We hit the highway at 3:00 in the morning for our 10 hour drive to Toronto. Rob thought that it would be funny to eat baked beans just before our trip. While the end result of stinking up the car worked as planned, Paul and I did get a good laugh that he had to hit the bathroom stall to unload at each stop. We stopped in Springfield, MA for breakfast, and ended up in the town's armpit eating at Dunkin Donuts across the street from the adult video store. Next stop was Buffalo, NY, which was kind of depressing as well...seemed like the town had nothing but car dealerships and muffler shops. We finally crossed the border and headed to Niagara Falls to catch the sights. It was my second time at the falls, but it is still so impressive...such a massive sight.
Next stop was Toronto. We hit some traffic trying to get into the city, so we got in a little later than we had expected, and got to the hotel around 6:30. We stayed at a place on The Esplande, near the bottom of Younge Street. We could always tell that we were getting close to our hotel from the smell of piss and sewage that covered the neighborhood. It seemed like a good section of town, but it certainly had a stench to it! A couple of things that I learned about Toronto...that city loves it's water fountains, Starbucks and Tim Hortons. The drivers also love to use their car horns, as there was always someone honking at a pedestrian or another car that they didn't think was moving fast enough.
Saturday was a fun day. We spent the afternoon walking around the city, trying to find the Noise Annoys record store. I don't know how we missed it, but we never found it. We even stopped into a comic book store that sent us down the street one way, and then asked for directions in another store that sent us in another direction. It was disappointing to not find it, but truth be told, I was okay with it because I had already spent a bit of money and not finding the store helped me not blow even more money. I did find one small record store that had a lot of old R&B and early rock records, and I was able to pick up a copy of Black Sabbath's Master of Reality LP. I really had to pick it up because it was a Canadian pressing and the back cover had a small maple leaf in the upper corner. It was a cool souvenir of our trip. After checking out the city, we went to the Red Sox / Blue Jays game. Once again the Sox lost...I've never been to a game that they won!
Sunday morning we headed back to the States, and got hassled by the border patrol. I'm not sure what the red-flag was, but we got pulled out of line for questioning. We had to park and then go inside and wait. I seemed to draw the shortest straw as the officer called my name. Two officers took me outside to search the car. I knew that there was nothing they would find, but I did get weak in the knees when they asked me if I had "ever been arrested before". Before? You mean like I'm going to be arrested now?!?! Everything was fine and after searching the car, we could go, but that was a little nerve wracking. The three of us were pretty spent at this point and the ride home was long and uneventful. Good to be home. 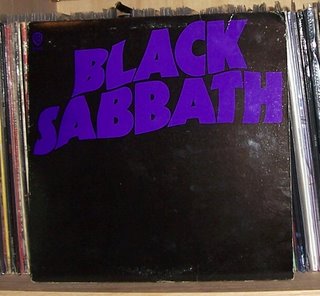 Iron Maiden is back with a new album, A Matter of Life and Death. The other day I picked up the first single, The Reincarnation of Benjamin Breeg. It was released as a 10 inch record on clear vinyl. I love the artwork on this single. It reminds me of those classic Iron Maiden covers that Derek Riggs did for the band years ago. The song is pretty good too, but the two songs chosen for the b-side I could do without. How many more live versions of The Trooper and Run To The Hills do we need? 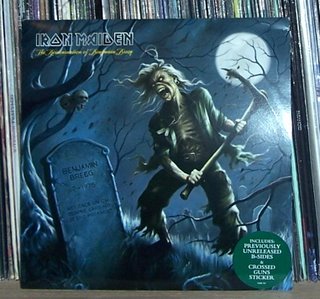 I'm going to see Maiden in Boston in October. There is floor seating for the show, and I have tickets for the third row, center stage. Sweet seats, but I'm not sure how I feel about floor seating for this show. On the one hand, it will be nice to hang out with my wife and friends during the show, who would not be up front otherwise. But come on, floor seats for a metal concert is kind of weak. The last concert that I went to that had floor seats was Harry Connick Jr. years ago. It is going to seem strange being up front at a show and not getting pushed around and crushed. I haven't seen Iron Maiden since they toured to support the Seventh Son album, and the new album is real good, so it should be a fun show anyway.

Finished my collection of the Triple Threat "New Chapter" 7 inch. I had been casually looking to complete this since last year when I picked up the blue vinyl at Posi-Numbers...occasionally searching eBay for the white vinyl, but never seeing it listed. When I was searching for some Have Heart vinyl, and came across the last Triple Threat vinyl that I needed, I jumped on it for $20.00. This 7 inch is limited to 200 on white, 300 on blue, and 500 on pink.
Posted by Mike at 9:37 PM 1 comment: 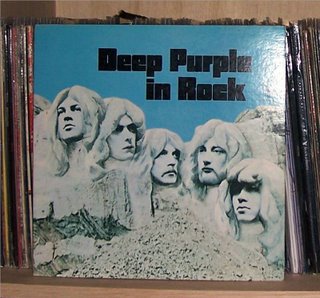 As a part of my awakening and appreciation of 70's rock, I fell in love with Deep Purple. I grew up hating this band. Back in the late 80's, when I was getting heavily into Thrash and Death Metal, I had a friend that tried to get me into this band. I wanted nothing to do with them. Shit was too "old and boring" for me. Here we are 25 years later and I'm a bit more open minded (or maybe just old and boring!). I can't remember what inspired me to give them another shot, but when I did, I was blown away by the intensity of the music. Shit is heavy. Not in the sense of heavy like 80's and 90's metal, but heavy with so much power behind those riffs...that voice. Amazing. This entry is for the Deep Purple In Rock vinyl. It is the Japanese pressing. I saw it on eBay for only $7.00 and jumped on it. Shipping from Japan was a little expensive, but I wasn't going to turn down the opportunity. Pretty cool with the song titles written in Japanese on the inside of the gatefold cover and a price of what looks like 2,300 yen on the back.
Posted by Mike at 6:48 PM No comments: 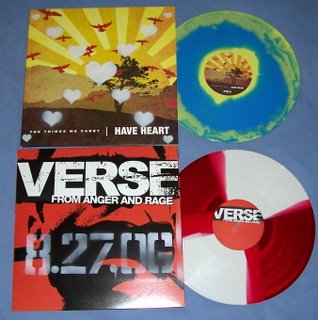 The day after I get back from vacation, Rob and I head to Massachusetts for the second annual End Of Summer Jam. The show was in Lawrence, which is notorious for being a rough town and Rob and I were not thrilled when we got a little lost once we got off the highway. Nothing to worry about though as we quickly found our way to the Knights of Columbus hall where the show was. We got there a little late, so we didn't have to worry about standing outside in the rain and were able to go right in. First place we headed to was the merch tables. Since this was the record release show for both Have Heart and Verse, we did not want to miss out on that vinyl. The Have Heart record was on the limited pre-order color, and had an X of hearts spray painted on the front cover, while the back cover had "EOSJ2, 8/27/06" spray painted on. The Verse record looked better, with the date spraypainted across the front, and the record sleeve was handnumbered out of 108. Mine was number 83. Other than the Resist demo, that was all that I bought, since money was a little tight. I was also finally able to meet Aram face to face. We had communicated through email a few times, and he was nice enough to send me the 12" of the Addiction EP (more on that in a future post), so it was nice to say hi, and thank him in person for the record.
Tons of great bands played this show...Have Heart, Verse, Betrayed, The First Step, Outbreak, and Resist. Betrayed played the best set for me. Aram had some cracked ribs, and yet he still put so much energy into their set. For their song Understand, Aram told the crowd that "This one goes out to my brother.", and then he rubbed my head. Yeah, maybe it is kind of stupid, but it really made me feel good. Other highlights included finally be able to check out Resist. They are a new band which has Wrench from Ten Yard Fight/Stand & Fight on vocals. It is always good to see Wrench on the stage fronting a straight edge band. The Have Heart set was insane. During Something More Than Ink, kids crowded on to the stage, singing along. It was fun having everyone pack on to the stage for that song, but unfortunately the kids thought it was so much fun that they would do it for each song, even though the singer repeatedly told them to stop so the the band could play and kids could dive. In the end it was a great show. Mark your calendar for the End of Summer Jam 3, next August. 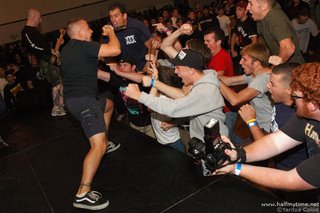 Here is a picture of me screaming along with The First Step.